How We Think – Personal Development

For your personal development, I just finished and highly recommend a rather big (530 pages), but readable, book on thinking–Surfaces and Essences: Analogy As The Fuel and Fire of Thinking. The authors are Douglas Hofstadter and Emmanuel Sander. You may remember Hofstadter from an earlier book, Gödel, Escher, Bach: An Eternal Golden Braid.

Don’t let the size scare you off. It is quite an enjoyable read packed with everyday examples and ending with the fascinating examples of mathematicians pursuit of solving quadratic equations and the development of Einstein’s thinking as he came up with his many theories that explained gravitation and mass-energy unity.

Analogy is the selective exploitation of past experiences to shed light on new and unfamiliar things belonging to another domain. Analogy-making is the lifeblood of cognition. It is also is the wellspring of creativity. As they explore analogy making, they touch on the education establishment’s tendency to believe in teaching things–especially science and math–with formal logic rather than analogy. This latter is ironic because so many advances in math are accomplished through analogy and not through formal logic.

This book’s summary of research and story of stories added to my knowledge and experience about how importance of story over lists of facts. Even in science and technology. Partly because sometimes what we take as facts really aren’t. I am betting that you all have developed new technologies or applications because you’ve visualized them first and then proceeded to search for the appropriate solution.

I interrupt the regularly scheduled programming for this public service announcement.

There was a section of a political science class I took somewhere around 1968 where we discussed media and politics. (Yes, Virginia, that was a topic oh so long ago.)

We did some research and discovered, hold on you won’t believe this, that people tended to read what reinforced their political views. People of liberal persuasion tended toward The New Republic (liberal in those days) and people of conservative persuasion read something else (I forget this morning the title, probably something with Bill Buckley).

This morning I was scanning a couple of my carefully selected news sources that used to just provide me with short, to-the-point news items. Unfortunately, they are slipping into the mainstream “journalism” news + analysis stuff.

Today’s lead on one site was–hold on, you won’t believe it–people tend to watch TV news that supports their political philosophy. Conservatives watch Fox, liberals something else. They even looked at favorite TV shows.

I could almost feel the breathless exclamations of surprise through the prose.

I believe that it is Heraclitus I could paraphrase as saying there’s nothing new under the sun.

Since I haven’t watched TV news outside of what I’m forced into in airport gate areas for 30 years, and I don’t watch any of the TV show genres they mentioned (occasional episodes of “Diners, Drive-ins, and Dives” along with a diet of European soccer didn’t make their list), I guess I remain firmly in the “no political party would have me” camp.

So, go read what you read and don’t let anyone make you feel bad about your choices. You will feel better, and then you can go out and develop and apply technology to make our industrial and manufacturing systems operate ever better.

Leadership As Getting Outside Yourself

I once wrote on leadership every Friday on another of my blogs. Then I felt as if I’d run out of anything meaningful to say. Publicists offer me books to read in order to review. I’ll share one I just received Friday–Formula X: How to Reach Extreme Acceleration in Your Organization by Jurriaan Kamer and Rini van Solingen. It was published in Dutch last June; the English edition will be available Jan. 28. 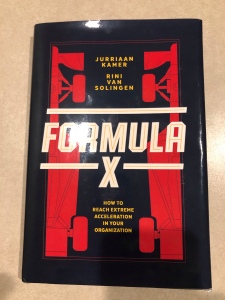 It is European, so the protagonist is known as a Managing Director rather than General Manager or COO. And the conceit regards Formula 1 racing.

I say protagonist because while the book is about leadership and organizational change, it is written as a story or “fable”. In that regard it reminds me of The Goal by Eliyahu Goldratt.

The protagonist is bright, yet clueless. The story weaves business and personal problems. And it is through learning from how a Formula 1 racing team operates that he learns how to organize the company, build teams, and achieve goals. It is only out of despair that he finally wakes up, gets a clue, and builds a winning team and relationship with his wife.

Sort of a journey from micromanager to orchestra conductor, if you will pardon the change in metaphor.

Whereas Goldratt was building a Theory of Constraints for optimizing production (it’s a 1980’s book, but still valid), Formula X steps back and looks at organizing the company and all its silos and disfunctions. It’s a blend of Lean and SCRUM (from programming) and Holacracy and other newer ideas.

The model is FASTER (as in racing cars must become…).

The authors use such Lean principles as Respect for People, daily stand ups (quick meetings), a form of 5S, using the people to find root causes of problems along with experimenting to find solutions.

A soccer referee friend shared this on another site. Being a personal development fanatic, I collect these habit disciplines, sort through them annually (or more often), and make intentional decisions about what sort of person I wish to work toward this year.

Nine Evidence Based Guidelines for a GOOD LIFE:

1. Exercise your body and your brain every day.

4. People, not things, make you happy.

6. Keep reminding yourself: It’s not all about me.

7. Just teach your kids how to cope.

8. Use your conscious reasoning to slowly make the changes you want.

9. When stressed, process your worries consciously.

Telling Stories to Mentor and Inspire the Next Generation

The end of the year brings reflections of years past.

My great-grandfather was an early electrical engineer. I heard many stories of bringing electricity to rural western Ohio at the dawn of that age.

Interestingly, he captured another spirit of his age by building an airplane and learning to fly it somewhere around 1919. His great-great-grandson now flies Boeing 777s. He’d be happy to see the progress.

He told his son, my grandfather, that at age 16 school was now a waste of time. He needed to learn a trade and bring some money home for the family. That would have been 1915 or so.

Grandpa apprenticed as a machinist at the Monarch Machine Tool Co. (Vestiges of which you can find at Monarch Lathes.) Somewhere in my archives there is a blog post about the demise of a great machine tool company in Sidney, Ohio.

Eventually grandpa became an area superintendent of production at a GM plant. He told stories about classes he took at General Motors Institute (GMI, now Kettering University named for Charles Kettering) when I was young.

He often described how he converted a plant that made refrigerators (Frigidaire was part of GM at the time) into a plant that made machine gun part for aircraft during World War II. Many of the ideas and actions he talked about as “common sense” were what I later learned as Lean.

Makes me reflect on what stories I’m telling and perhaps what stories you’re telling to young people now to get them interested in making things.

I’m about to mentor a small group of kids learning the LEGO Robotics. The school was looking for someone who knew something about programming to give them tips. I’m in a position to share. What about you?

The Making of an Organization’s Culture

Who you are is not the values you list on the wall. It’s not what you say at an all-hands. It’s not your marketing campaign. It’s not even what you believe.

Your organization’s culture is what you do.

What you do is who you are.

Thus Ben Horowitz introduces his topic–how to develop and sustain an organization’s culture. This is not one of those leadership books where you read the first two chapters and you have everything the author intended to say. Horowitz fleshes out the concept through a series of gripping stories exemplifying parts of the process.

Elements of a successful culture can be seen in the Eight Virtues of Samurai (successful in Japan for hundreds of years):

Here are a few concluding thoughts from the book:

The most important element of any corporate culture is that people care.

Culture begins with deciding what you value most. Then you must help everyone in your organization practice behaviors that reflect these virtues.