I was working with controls, instrumentation, computers, software when I traded it in for media work first with Control Engineering and then with Automation World. Through a lot of those media years, Honeywell was one of the Big Four or Five in process control and systems. Over the past 6-10 years, those big companies have diverged into differing specialities. It’s been interesting to observe that part of the industrial market.

Honeywell began leveraging expertise of its various divisions into wireless, mobile, and wearables. Much of the emphasis has been safety with a spillover effect into productivity.

Wearables comprise a growing market category with much promise. I’ve had the opportunity to try on a number of different products. These increasingly solve real world problems with ever reducing interference in the real work of the person.

In this latest release, Honeywell announced that Braskem Idesa has adopted a hands-free, wearable connected technology solution at its plant in Veracruz, Mexico. Honeywell’s Intelligent Wearables will allow Braskem Idesa to improve productivity and compliance with process procedures, capture the expertise of experienced workers and provide critical insights and information effectively to trainees and support workers in the field. 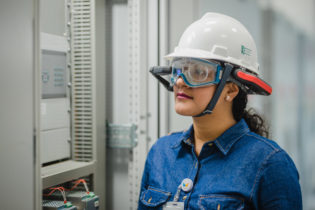 Honeywell is delivering a complete outcome-based solution that tracks specific key performance indicators and integrates hardware, software and services, and a full Wi-Fi infrastructure to support use of the solution across the plant. The wearable technology will also accelerate training and ensure safety for field operators at the Braskem Idesa facility.

“With this solution, Braskem Idesa is embracing the digital transformation that will enable us to retain our leadership in the petrochemicals industry,” said Roberto Velasco Gutiérrez, industrial director, Braskem Idesa. “Capturing all the relevant expertise and data within the organization and getting it to workers wherever and whenever needed, will help get trainees safely into the field faster and ensure that every worker operates to Braskem Idesa’s best standards.”

A comprehensive range of applications from Honeywell will boost the speed, safety and reliability of field workers thanks to the following services:

“Braskem Idesa has not only taken an important step toward Industry 4.0 but has now also replaced paper-based and manual operations with a sophisticated solution that’s both digital and wireless,” said Vincent Higgins, director of technology and innovation, Honeywell Connected Enterprise, Industrial. “Wearable, voice-controlled computer headsets and software eliminate the need for clipboards, pens, and flashlights. Our offering will help Braskem Idesa capture expertise and document critical tasks to ensure operational compliance.”

Honeywell’s solution for field worker competency and productivity enables Braskem Idesa to tie its plant performance directly to the performance of its workers, critical to the success of any industrial enterprise. By connecting field workers with remote advice, Honeywell Intelligent Wearables also reduce the need for site visits from experts, empower workers to continue learning, become their best and effectively share their knowledge with peers. Cyber protection takes on a number of forms. Most everything involves “defense in depth” strategies. I just talked with an Israeli company started by former security agents who has found a different vulnerability and counteracts it. This is the first of three press releases I’ve been sitting on for release today. I guess Nov. 15 is a magic day in the PR world.

APERIO Systems, already deployed at several sites across EMEA, secured seed funding from a consortium of private investors, including prominent cybersecurity veterans Doron Bergerbest-Eilon, Liran Tancman, and Shlomi Boutnaru. Bergerbest-Eilon is renowned for his role in establishing the agency charged with protecting all critical infrastructure in the State of Israel and is the former director of the security and protection division of the Israel Security Agency (ISA). He is currently the founder, president and CEO of ASERO Worldwide, a security consulting firm. Tancman and Boutnaru, who played key roles in building Israel’s cybersecurity capabilities, founded predictive cybersecurity startup CyActive, which was acquired by PayPal in 2015.

“Current solutions focus on keeping hackers outside critical systems, but attacks like the one that took down the power grid in Ukraine clearly show that sophisticated attackers will eventually penetrate these systems,” said Bergerbest-Eilon. “Once attackers breach a system, they must blind the operators and protection mechanisms by falsifying data in order to inflict severe and long-lasting damage. This entirely new category of Data Forgery Protection (DFP) is the key to keeping our critical infrastructure safe from attacks.”

Industrial control systems (ICS) are generally outdated from a cybersecurity perspective, vulnerable and difficult to patch because mission critical systems cannot be taken offline. While the threat to ICS is growing, critical systems security products on the market today are intrusive, hard to maintain, costly to integrate, and often produce vague and unactionable alerts, which cannot be acted upon by critical utility control rooms.

“Think of APERIO Systems as a polygraph for process data — it detects when your system is lying to you,” said Yevgeni Nogin, CEO of APERIO Systems. “With the unrelenting tenacity of cybercriminals, critical infrastructure breaches are inevitable. By guaranteeing the authenticity and integrity of operational data, APERIO Systems ensures that operators always know what’s really going on, enabling them to react quickly to a breach and take corrective action — making the critical systems resilient to the most dangerous of attacks.”

Both internal and external attackers can penetrate the most critical infrastructures, causing severe and long lasting damage. In order to do so, they must hide their malicious activity and deceive plant operators by forging the reported values of critical devices — remaining undetected and preventing timely corrective action. APERIO Systems’ Data Forgery Protection technology immediately exposes forged system readings to safeguard critical control systems and allow quick and effective remediation.

APERIO Systems is led by a veteran executive team with roots in the elite units of the Israel Defense Forces (IDF), as well as top cybersecurity and industrial companies:

Unleashing The Power of the Industrial Plant Operator

Plant operators have been isolated in remote control rooms for decades. They tend to lose intimate knowledge of their processes as they monitor computer screens in these isolated rooms. The sounds and smells are gone. Everything is theoretical.

This system has worked. But, is it the best, most efficient, most effective use of human intelligence?

Not likely. Technologies and work processes are joining to allow plant managers to change all this.

Tim Sowell, VP and Fellow at Schneider Electric, recently shared some more of his prescient thoughts on this issue–spurred as usual by conversations with customers.

He asks, “What is the reason why users have been locked to the desk/ control room, why has this transition not happened successfully before? It is simple, the requirement to be monitoring the plant. A traditional control room is the central place alarms, notifications were traditionally piped.”

Diving into what it takes to change, Sowell goes on to say, “The user needs to empowered with situational plant awareness, freed from monitoring, shifting to the experience of exception based notification. As the user roams the plant, the user is still responsible, and aware, and able to make decisions across the plant he is responsible for even if he not in view of that a particular piece of equipment. Driving the requirement for the mobile device the user carries to allow notification, drill thru access to information and ability to collaborate so the dependency to sit in the control room has lifted.”

Two streams join to form a river. Sowell continues, “The second key part of the transformation/ enablement of an edge worker is that their work, tasks and associated materials can transfer with them. As the world moves to planned work, a user may start work task on a PC in the control room, but now move out to execute close action. As the user goes through the different steps, the associated material and actions are at his finders tips. The operational work can be generated , assigned and re directed from all terminal.s and devices.”

The first generation of this thinking formed around the rapid development of mobile devices. Before plant managers and engineers could come to grips with one technology, the next popped up. Instead of careful and prolonged development by industrial technology providers, these devices came directly from consumers. Operators and maintenance techs and engineers brought them from home. Smart phones–the power of a computer tucked into their pockets.

Sowell acknowledges it takes more than a handheld computer. “It requires the transformation to task based integrated operational environment where the ‘edge worker’ is free to move.”

The information must free them to navigate with freedom, no matter the format, no matter where they start an activity, and have access to everything.